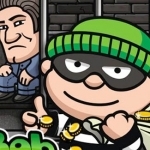 Steal treasures, avoid cameras and take out guards in Bob The Robber 1, a fun stealth puzzle platform game! Bob knew his destiny from a young age. He trained hard for years to learn his trade. After years of practice Bob decided to sneak into the club and steal the treasures! Bob The Robber is an wonderful game from our lengthy game listing in friv2013.com. With Bob The Robber, we've got a large list of Friv 2013 games to have fun playing with.