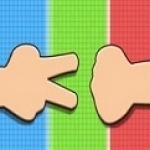 Two people are playing rock, scissors and paper game and you have to announce the winner in each round. The rules are the same as every rock, scissors and paper game and all you have to do is to choose which side has won or in case of draws, call it a draw. You also have a limited time to announce the result and if you fail to do so during that time or accounted the wrong result, you will lose one live. You have 5 lives, so you can make 5 mistakes. Here you can play Rock Paper Scissors 2 game and observe its walkthrough at no cost in friv2013.com. Rock Paper Scissors 2 is an wonderful game from our list of Friv 2013 games.

Use Left Mouse button to Play